It Has been 2 months since the USS Hades, was destroyed at the battle of olympus station! 2 months since the now captain colin lightwood, was utterly destroyed by his ex wife krissy! the klingon war is all but simmering, Starfleet are turning the wagons. War is still afoot and the now Hades-A is flying straight back into the war, but this time things will be all but differnt... A battle harderned crew, a battle harderned captain! its time to show the klingons where starfleet stand and its up to the USS Hades to light the torches of war! 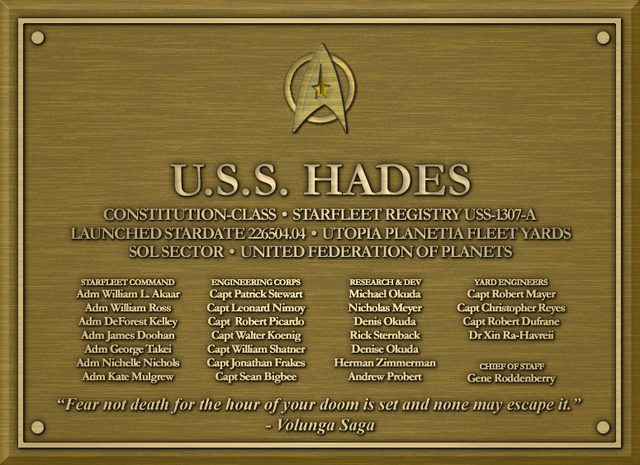 Hello everyone! My name is Matt and I play Ryan North, your new chief science officer. Just getting my feet wet so if anyone is interested in doing a JP or something let me know. Looking forward to simming with you all.

The Power Of Love (Posting Event)

Good morning or day to my wonderous crew! As most of you know yesterday i announced a rather intriguing event! The Power Of Love! Now its not a mandatory event, im not going to force you all to do it! Ok So ladies and Gents heres how to get involved Send me a pm with the characters you'll be using for the event, I'll add those to a sheet on google docs! If you have some predetermined couples or onces you want to explore send those in aswell so i can keep a track of what is going on!

The power Of Love event, is an event that is based on the thought and premise that love conquers all! The power of love doesent just mean romantic love eitehr it'll cover friendship love, family love all things love! In a war-torn universe i think its important to count the blessings of each other! So this event is designed to help keep us in a bit of a light hearted mood and help some *Cough-Cough* Relationships Flourish (Scott and Surak) *Cough- Cough* So this is all designed as a little bit of a valentines event sort of but without it being valentines day! Once This event is Over the Command Team will get togther and discuss the results via a poll.

So here's a break down of rules and Such!

1:This is Event is not Mandatory so its sign up only!
2:Sex Scenes will have to be fade to black!
3: There is no limit to the amount of posts but try and keep it between one couple or set of charchters!
4: Mostly some light foreplay is ok providing its done tastefully!
5: Creativity is encouraged!Q
6:Most important no godmoding or power playing (That is a ban-able offence and i wont stand for it!)

(Awards Will Be Added By Next week at the Latest)

Lt. Roger Harrison, Chief Medical Officer for the USS Hades, stepped into the Med bay. Blue shirt was neatly pressed but his slacks were a little crumpled from sitting during breakfast. He held a mug of Barry’s tea in one hand, and a…

Lt. Roger Harrison, Chief Medical Officer for the USS Hades, stepped into the Med bay. Blue shirt was neatly pressed but his slacks were a little crumpled from sitting during breakfast. He held a mug of Barry’s tea in one hand, and a…

COlin had only just got out of that scrape alive, whilst the the new Hades, a brand new Constitution class was having her bells and whistles tested, Colin had been given a temporary office on earth space dock! sat in his gold uniform with Percy, curled up on his desk…

» Batten Down The Hatches Were Saving Perseus

Eddy was running round the broken ship, the halls were battered and bruised "Marines meet me at the sickbay we have an emergency" Eddy had lost sight of Colin "Fuck" he muttered under his breath, as he looked around, he was worn out physically and mentally. The attack had really…

» Getting to know you

Jason was sitting in his office going over duty reports. He wondered when he would meet his assistant chief.

M'Rerr walked to her Security Officers door to ring the chimes and waited for him to say come, her uniform was straightened and the rest of her furry body was cleaned…

M'rerr continued to be scared and frieghtened she was in one of shuttles not knowing anyone, she wondered where the whole crew would
go,. so she stayed quiet as she looked at the others sitting and wondering whats gonna happen next for her and the crew. The whole thing to…

» The Wreck of a ship called Hades

M'Rerr was a frighten Scared kitty she was the newbe security officer who was asked to jump in a shuttle and take off now. M'Rerr had no one to talk to just sit in the shuttle and just be quiet.
She and many others were in this and many other…

» The power of love

Farthing walked back and forth in his room. Dawson's words ringing in his ears. Yes, he did need to make his intentions plain so Melissa would have no doubt how he felt about her. The investigation would have to wait. His future and his happiness needed to be seen to…

Scott lay down on his bed after a long first day on the ship, he picked up the PADD nearest him and instructed the computer to start recording his voice as he removed his uniform and prepared for bed. The vessel had not long left, and the first nightshift was…

» Taking Everything with You (Trigger Warning)

"Well, today was harder than I thought." Colin started talking in a hushed tone, standing and pacing. His hands fumbling around in his hair. "I never thought I'd have to face those times again..." he said, grabbing his…